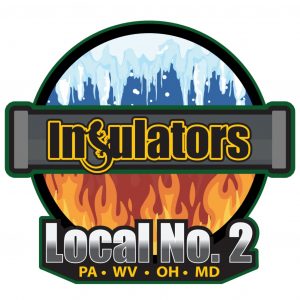 New look, new logo! Like many great, American stories, Insulators Local No. 2 takes pride in its legacy and is ringing in a new year of trailblazing in its next chapter. From its beginning roots, Local 2 formed through resilience into its current 20,000 members of the International Association of Heat and Frost Insulators and Allied Workers. Insulators Local 2 has been American made for more than 100 years and is continuing its legacy with a new logo look starting in 2020.

Tom Mulholland, president and organizer of Local 2, has been in the industry for 31 years and continues to uplift his union through its transformative times while honoring the past. With the new logo, Mulholland says, “We always used the trademark of the salamander on top of the pipe and flames, and it’s still going to be the logo for the International Association of Heat and Frost. But now, Local 2 has something special that will give us a regional feel throughout Pa., Ohio, West Virginia and Maryland for Local 2.”

Incorporating the salamander within the logo honors its traditional look by keeping the legend alive about the myth and tales of the impervious-to-flames-lizard. Mulholland recounts to why the salamander has been associated with asbestos for more than 100 years.

He tells the story of the amphibian, impervious to fire. The creature hibernates and often hides in woodpiles during the winter months. Legend has it that the salamander hides in the bark and secretes a chemical to give it protection when placed in the fire. It would scurry out, mythologically becoming a legend in its ability to be impervious to fire.

In addition, the salamander has been compared to asbestos, adapting to the indestructability of intense fires. It is reported that during Marco Polo’s travels, Polo crosses paths with Tartary, who possessed an asbestos cloth cleansed against fires. Polo is said to have inquired about the material and was told that the material came from “Salamanders Wool”.

As an insulating material for on-the-job completion, the union knows that asbestos protects buildings through its imperviousness to fire in the past. Through these tales, the longevity of the lizard has thrived to resemble resilience and strong will while protecting itself from intense, earthly elements. Now, the salamander lives on through the incorporation of the name “Insulators,” forging itself in its new habitat.

With its new legendary look, Mulholland says, “It’s simple, yet packs a punch of color in order to catch the eye while others understand and associate local 2 as the premier mechanical type of insulation.”

The mission of the new logo incorporates its message of work with “frost” and “heat” in a crisp, clean feel, like its mission for building a better region in all types of insulator work. There is an icy, frost-covered scene on top of the logo while bursting flames ignite the bottom to represent the passionate work of Local 2.

Also, the modern look hopes to attract a younger audience that may be interested in the fulfilling careers of becoming a part of the Local 2 family. Through creativity, ingenuity and lizard-infused logos, Insulators Local 2 represents the premier standard of building from the ground up to create jobs for everyone while recreating itself and the region.