Professionals of Insulators Local 2 are highly skilled tradespeople with a wide range of talents. From an industrial standpoint, our union members’ work includes all types of industries, such as chemical process, petrochemical, metal and other process industries, liquid organic heating systems, steam condensing cycles, high-temperature hot water systems, etc. From a commercial standpoint, work includes buildings, building services, and refrigerated spaces. How do members find their calling within our trades? One member, Bill Yund, found his calling with our union through various work opportunities and by incorporating his passion and talent for art. His talents helped shape awareness and transparency on the importance of our unions while showcasing the resilient history of unions also.

Yund began to work with the Insulators Local 2 in February of 1969. His first project included the construction on Pittsburgh’s Monroeville Mall. Yund says, “This is the third union I’d been a part of, and the best by far. I’ve worked in nearly all industrial and commercial aspects, from helper to foreman and steward.”

The Local 2 newsletter, Heatpath, became part of Yund’s work almost 30 years ago. He started doing some rough illustrations and cartoons. The mimeographed newsletter was initiated by former president Ed Wojtaszek Sr. and encouraged by secretary-treasurer Rege Coll Sr. Furthermore, Marty Connolly, who had a journalism degree, completed the newsletter’s writing and editing and Yund eventually took over the writing responsibilities a year or two after.

His creative work and unique spotlights won a number of International Labor Communications awards in the 80’s. Most importantly, it helped inform the homes of tradespeople and beyond. Yund explains, “In doing the newsletter for Local 2 for a long time, it occurred to me that it went into homes, so it was accessible for kids and families. In order to extend the lifespan from the mail to the trash, I incorporated a graphic novel page to hopefully gets kids involved to showcase labor history and so on.” Yund’s creative approach helped educate kids while fostering quality time in the homes of union members.

His talents evolved through other mediums such as moderating the International Association of Heat and Frost Insulators and Allied Workers Facebook page, for four years. It was established by retiree international president, Jim Grogan, and has done artwork for various unions and trades groups in past decades. Notably, Yund has even won an award in illustration for the United Steel Workers (USW) publication, “Steel Labor.” Fictional illustrations included work for “Monongahela Dusk” by author John Hoerr. Other illustrations included for author Charles McCollester’s “The Point of Pittsburgh.”

Besides his contribution through artwork, Yund has been on the boards of two labor history organizations, Pennsylvania Labor History Society and Battle of Homestead Foundation. His advocacy of raising the American workers’ voice helps to foster representation through history. Yund says, “There’s a lot of history in labor here with the Battle of Homestead, Pressed Steel Car Uprising, the start of the AFL CIO and so on.. There is drama and milestones in labor history.”

As a Local 2 member and proactive union professional, Yund has transcended his talents through the art of illustration and raising the union voice for all to be seen and heard. Not only that, he has helped pave way for a brighter future by showcasing the sacrifice, determination, and prosperity of union workers while being a leading example of how one’s talents can benefit us all. See below some of the artwork that Yund has completed over the years. Thanks for raising the union voice, Bill! 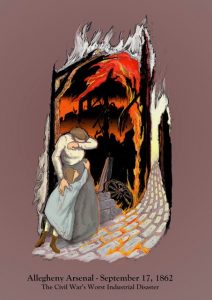 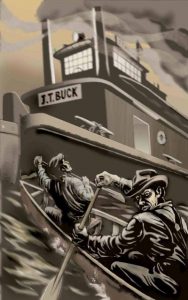 One of fifteen panels at the historic Pumphouse in Homestead: