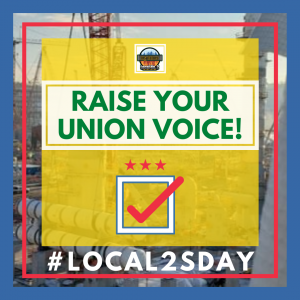 Raising one’s union voice is held to a sacred standard to fostering equitable rights and implementing positive, productive policies that protect union members. Thanks to union voting, many benefits have stemmed from the power of advocating for one’s right. For example, unions have paved way for improved workers’ rights such as child labor laws, 8-hour workday, health & safety OSHA, health care, workers comp, age discrimination laws, the Equal Pay Act, and so much more.

Voting is an essential part of civic duty. It helps to collectively shape what’s important in people’s lives and how societal and economic policies are formulated to benefit the American people. Nonetheless, participating in elections and utilizing one’s voting voice is one of the key freedoms of American life. There are many areas and countries in the world who do not reflect the same freedoms of voting, nor did many Americans in centuries past. In short, no matter what you believe or which political party you support, it is important to exercise theses rights as Americans, especially in the union industry.

How does a union member stay informed on important issues within the union? The American Federation of Labor and Congress of Industrial Organizations (AFL-CIO) can be a fundamental resource for education and staying informed. The organization helps to improve the lives of the working people and is the voluntary federation of 56 national and international labor unions that represent 12.5 million working men and women. The organization has helped to make sure that workers are treated fairly with livable paychecks, benefits, safety on job sites, equal opportunities and more. Not only that, it helps people acquire valuable skills and job-readiness for our current economy and operates the largest training network outside of the U.S. military.

As an added perk of being an informed union citizen, the AFL-CIO offers a Legislative Scorecard. It is a voting record that informs citizens of where lawmakers stand on issues important to working families that include strengthening Social Security and Medicare, freedom to join a union, or improving workplace safety. It also reflects key votes on the House and Senate with the date each legislation was voted. Also, each legislation has a brief description of the bill and how the AFL-CIO stands on the position of each bill passed by the House or Senate.

Local 2’s standards on raising one’s union voice helps to empower the American people and create a fair playing field on being heard. By staying informed, individuals can utilize their American right to vote smart and help shape the future for all fairly. Voting and education are two prime standards that Local 2 lives by, and we are union proud to showcase it!