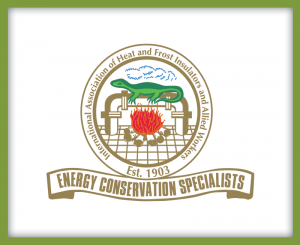 Like many great, American stories, Insulators Local No. 2 is rich in historical context. From its beginning roots, Local No. 2 formed and merged through resilience into its current 20,000 members of the International Association of Heat and Frost Insulators and Allied Workers. With the help of union rallies, ingenuity and reptile logos, Insulators Local No. 2 represents a great example of building from the ground up to pure, American success. Within it story lays one of the favorite tales to portray though the union, and it is the legendary lizard, more of a salamander, which is the forefront of recognizable attributes to Insulators Local No. 2.

How did the famous salamander get its place on the logo? Why does it seem to thrive above a fiery flame in its glory as the trademark of the International Association of Heat and Frost Insulators and Allied Workers? Through constant unionization efforts and collaboration, most think it got its name as far back as 1900 in the first attempt to form a national bond between the existing insulators associations. The reptile first made it appearance from The Salamander Association of New York City, in which they sent out an appeal to related crafts in other cities to form a “National Organization of Pipe and Boiler Coverers.” Together, unions were forming as one entity across the nation during the time period and would evolve again and again.

Many tell the story of the amphibian, impervious to fire. These creatures hibernate and often hide in hollow trees or woodpiles during the winter months.  The hibernation occurs until the spring when its time for their revival. For this reason, the little creatures can be found burrowed within firewood. When the wood is added to a fire, the hidden salamander awakens with only enough time to put forth a swift escape, while seeming resilient to fire.

To dive deeper, the salamander has been compared to asbestos, adapting to the indestructability of intense fires.  It is reported that during Marco Polo’s travels, Polo crosses paths with the Tartars, who possessed an asbestos cloth cleansed with fire. Polo is said to have inquired about the material and was told that the material came from “Salamanders Wool”.  As an insulating material for on-the-job completion, we know that asbestos protects buildings through its imperviousness to fire. Through these tales, the longevity of the lizard has thrived to resemble resilience, strong will and foundation while thriving to protect itself from intense, earthly elements.

These are just a couple of tales, but it is apparent through time, whatever the interpretation may be, it thrives through the flames, perched on its pipe in a mighty stance to resemble the greatness of Insulators Local No. 2. At the national convention in 2007, the organization’s name became the International Association of Heat and Frost Insulators and Allied Workers, although the famous staple of the impervious reptile remains the same today as we enjoy the colorful tales of how it got there in the first place. The salamander has its home with Local insulators 2, like many members who have the opportunity to thrive with the union today.